Interfaith Pilgrimage of The Middle Passage

Art by: Tom Feelings
Retracing the Journey of Slavery


The Interfaith Pilgrimage of the Middle Passage is a twelve-month walk through the eastern United States, the Caribbean, Brazil, West Africa and South Africa. It will retrace the history of slavery by foot and continue by boat, reversing the direction of the middle Passage. Beginning in New England, lucrative point in the Triangular slave trade, the journey will move through southern states, where enslaved Africans were forced into large scale production of sugar cane to accumulate wealth for European powers and were "broken in" for plantation labor on the mainland. Finally, the pilgrimage will continue once again by boat, to West Africa, the ancestral homeland of the Africa Diaspora, where the journey will progress by foot, for the final length of the walk.

The Pilgrimage will be a living prayer of the heart, mind, and body for the sons and daughters of the African Diaspora. By acknowledging and embracing the terrible history of slavery and radical oppression, it is hoped the journey will be a step in a healing of the wounds inflicted even until today, and a purification of the heart of all connected, intimately or distantly, with this history. In the U. S. auctions, slave quarters and Lynching. Prayers and offerings will be made for the spirits of those who suffered and died at the sites. We will also visit the way stations of the Underground Railroad as well as other sites attesting to the dignity in the face of slavery and racial oppression. We walk through this history to nourish seeds of genuine consciousness, so that in the next century, a more humane, compassionate and equitable world can be realized, a world where the ravages of racism no longer plague our minds and the human spirits is liberated to grow in greater truth.

The purposes of the Pilgrimage are

1) To offer prayers for the spirits of people of African descent who have gone before and to honor both them and their descendants who have suffered so much hatred and injustice at the hands of the white population, realizing that the spirits of the oppressors are also in need of our prayers.

2) To open the way for all whose lives have been affected by this most egregious history, to engage with it and especially to give an opportunity to people of European descent to take responsibility and to express repentance is a very necessary and therapeutic step for human beings, and, in the case of the deeply-defensiveness, denial and fear which from the unconscious underpinnings of a society still gripped by racism.

3) To reverse historical patterns by moving eastward to Africa, thus "giving back" the honor and respect pillaged from Africa along with its people and natural resources. To show gratitude and respect for the greatness of this continent with its diverse peoples and regions and to express our belief in its regeneration after centuries of colonial depredation.

4) To offer multi-faceted educational opportunities on the institution of slavery to participants of the walk, the organizing volunteers, and the community at large, in order to create a context for the current state of global communities in an honest history.

5) To transform the thinking that spawned racism, namely the appetite for material power and luxury in Western nations, and the consequent reduction of human beings to the status of objects to be bought, sold, easily demeaned and killed profit, denying the profound and noble spiritual nature of all people. This materially-based thinking continues today in domestic and international policies that relegate millions-mainly people of color-to poverty, even in wealthy countries like the U.S. Hard pressed by these policies, too many are forced to use desperate means to survive, while the life-giving spiritual foundation of human civilization, cultivated from ancient times, is further destroyed. To find our way for the next century, we must affirm and respect the precious, spiritual nature of all people, the true source of moral power to transform our violent, materially-based civilization.

The Pilgrimage, Initiated by the Buddhist order Nipponzan Myohoji, is being organized by a group of people of diverse backgrounds and is open to all who wish to join and agree to its purposes and principles. It will have an Interfaith perspective, whenever possible involving the traditions to which Africa-Americans and people of African descent have primarily devoted themselves, that is Christianity, Islam and the traditional religions of Africa and their forms in the "New World."

Each morning of the walk will begin with interfaith prayer before the days journey of 15-20 miles. Walking can be a potent medicine for mind and body.

When we walk together, our feet touch the same earth, we walk beneath the same sun and soak in the same rain. As we journey together with a common purpose, we realize that joys and difficulties can arise but the difficulties need not stop us. In walking, we begin to restore the spiritual strength of humanity, the strength to reverse the vicious repercussions of our history and move towards a genuinely peaceful society nourished by the innate generosity of human begins and the natural world.

Support for this pilgrimage in it many facets is needed.
For those interested in being a part of this most auspicious endeavor please call the number listed below.
We thank you in advance for your support.

The Route in the U.S. will include: 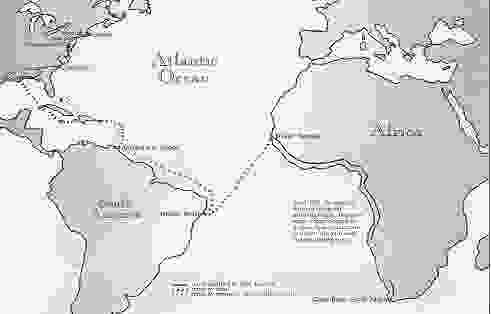 
The above is only a partial listing of major sites, sketching the basic outline of the walk. Estimated walking time in the U.S. : 5 months.